Club member Tom Wood took his 4th win in a row in the MRF Tyres Fiesta ST Trophy at the Plains Rally earlier in May. Back alongside Welshpool driver Zak Hughes, the pair contested 5 stages consisting of Dyfnant, Aberhirnant and Llangower.

The crew managed to survive an 85mph 5th gear spin, bouncing out of a ditch and ending up facing the right way, but still going on to set the fastest stage time on the opening test in Dyfnant. On the approach to SS2 the car cut out on the road section and wouldn’t start for 16 minutes. Eventually the car came back to life and the crew then went on to set another fastest stage time. At service the crew found themselves with a 22 second lead.

Onto the second loop of stages and it was a repeat of the two earlier stages with the final stage being the Llangower test. The crew felt confident and had a good rhythm through Dyfnant 2 and then onto the Aberhirnant 2 where, due to some very poor road conditions, the crew decided not to attack and risk a puncture. Hughes/Wood dropped some time to 2nd place Bobby Mitchell but after matching times with Mitchell on the final stage they secured their 4th out of 4 wins.

“I’m very superstitious, but I really feel like we have one hand on that championship win. We’ll do everything we can to make sure it’s secured at the next round in just over a month’s time” – Wood

Next up is the Nicky Grist Stages in July starting from  Builth Wells. 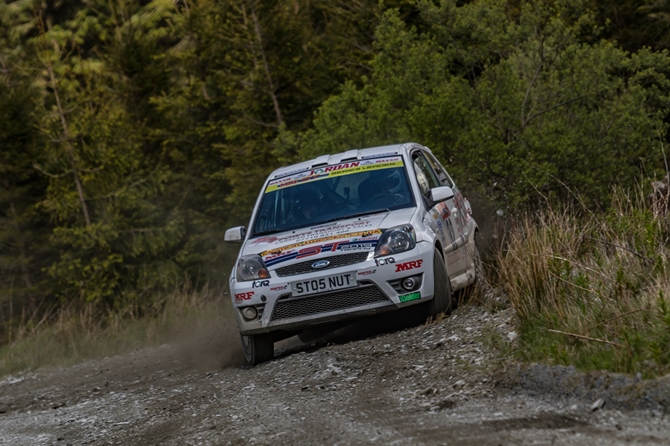